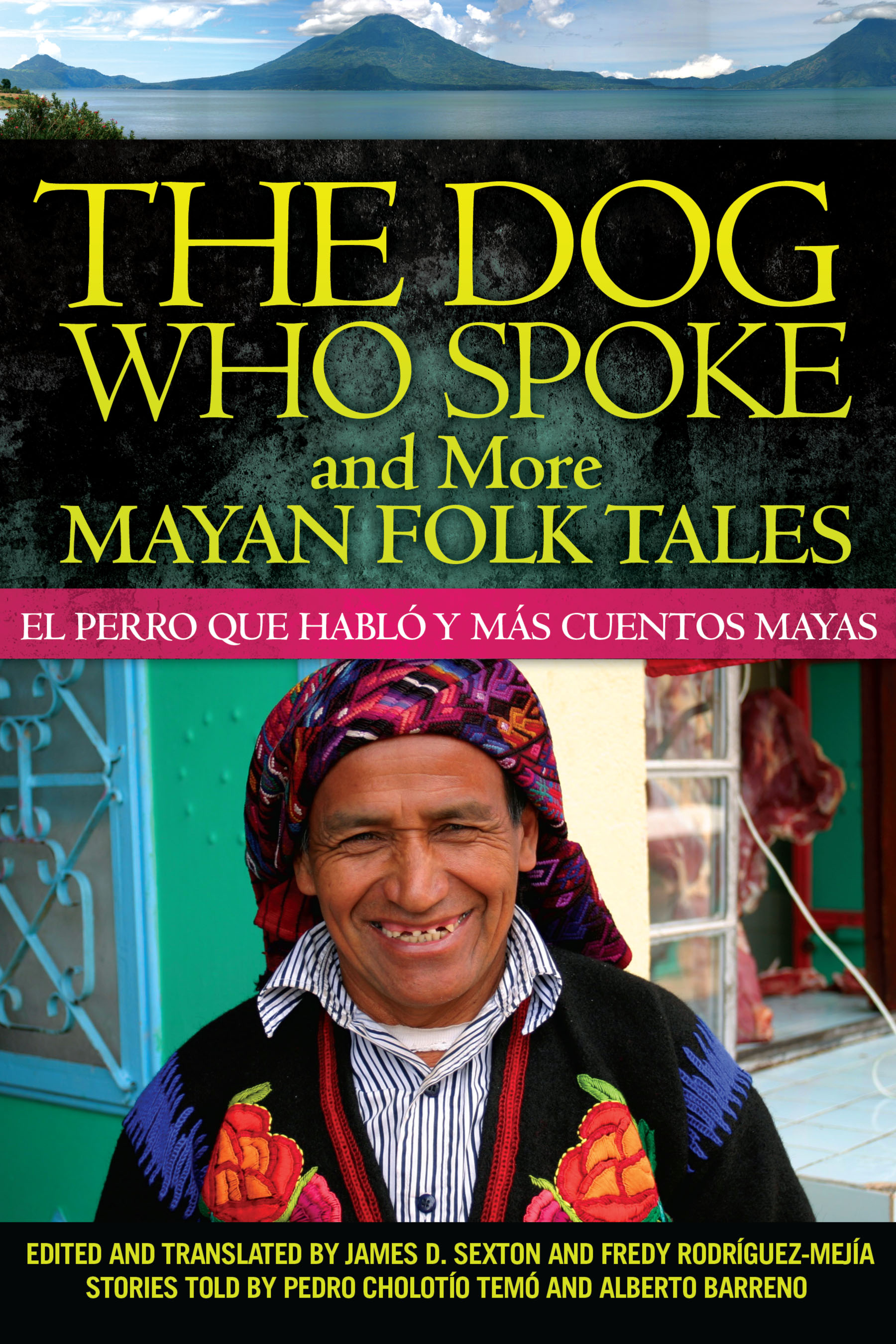 The Dog Who Spoke and More Mayan Folktales

This is a bilingual book in English and Spanish of thirty-two unpublished folktales from San Juan la Laguna and Panajachel, Sololá, Guatemala, collected by myself, James D. Sexton, a cultural anthropologist, over a twenty-one year period.  The story tellers are Pedro Cholotío Temó, a Tz'utujil Maya who lives in San Juan and Alberto Barreno, a half-Kaqchikel Maya who lives in Panajachel.  Fredy Rodríguez-Mejía, a part Ch'orti' Maya from Copán Ruinas, Honduras, and doctoral student in anthropology at Michigan State University, and I are the translators and editors.  Also, I wrote an introduction that places the stories in their cultural context.  These enchanting tales include talking dogs, donkeys, crickets, jaguars, and parrots.  In these stories also appear witches, characoteles, cadejos, duendes, magical objects, sacred caves, transforming supernatural animals and humans, and legendary Mayan heroines and heroes.  These highly entertaining stories reinforce cultural values, instruct readers in proper deportment, and reflect the Mayan culture in which they are told.  Because none of the stories is risqué, they are all suitable for readers of all ages.

"Q&A with Dr. James Sexton" by Trevor Gould, JackCentral, 23 November 2010. (To find this article use the "search" function on JackCentral's A&E hyperlink.)

Long ago, they say there lived an old couple of the raza [ethnic group] Kaqchikel in Sololá.1 During their lives, they had no children; it was just the two of them. Life, they passed it sad. The couple owned sitios [homesites] and lands because the man's parents were rich. As time passed, they grew old. The old woman could barely grind the nixtamal [corn cooked in lime or ash water] for the tortillas. This also happened with the old man, who could barely prepare the firewood to cook food. Everything that happened to the old couple was an affliction.

In time, they died, and they were buried in the sitio. They did not sell the sitios or the lands before dying. When the old couple died, people took advantage and took possession of their sitios and the lands. Well, the people built their ranchos [rural shacks, generally made of cane or poles with palm-leaf roofs], and they lived on those sitios without any fear because the owners were now dead. The people were happy, living on the sitios of the old people.

After five years, they say, the problem came. Suddenly, clay pots and pitchers moved around during the night. The beds moved as if somebody were blowing on the fire. The ranchitos [small ranchos] were no longer peaceful.

One time, it is said that the owners of the house were eating dinner at nine o'clock sharp at night. In the past, there was no electricity; ocote [resinous pine] is what they used to provide light inside the house. Just then, while they were eating, suddenly an arm stuck out from under the bed, similar to a person's arm but hairy. In other words, it was a shaggy arm, and it vanished at the top of the door. The people who were eating got scared and could not sleep in peace anymore.

Because the sitio was large, the following day they changed the place of the ranchito. But they say that there was still no peace. It seemed as if someone were walking through the sitio at night--they heard strange things.

It is said that the owners of the house went to a zajorín [corruption of zahorí: indigenous witch who usually acts also as a curer or shaman] to find out what was happening to them. The zajorín told them, "They are evil spirits, but with a secreto [magical ritual or object] everything will disappear." They performed the secreto as the shaman had told them, but it was of no use.

After a few days, they heard [noises] as if people were sweeping the sitio at night. The owners of the house bought a dog so that it could guard it at night. So it was. They bought the dog, but this complicated the situation because the dog did not let them sleep at night. It barked and barked as if [there were] something the animal was seeing. The owners of the house could not sleep because of their fright and the barking of the chucho [dog].

One night, the man, tired of the racket, could stand it no longer, and he gave a good beating to the unfortunate dog. The animal, they say, was between life and death. At dusk of the following day, the man approached the dog to give it some tortillas. But the dog could not eat because of the blows it had suffered.

Suddenly, they say, the dog spoke to its master, telling him, "My master, I am going to die. I cannot eat anymore because of the blows that you gave me. I am not to blame. During the night when I bark and bark, it's because I am seeing something. I cannot sleep because a man and a woman appear to me. The two are old. They are the ones who do not let me sleep," the dog said to its master. Besides, he told him, "You had no mercy for me, so now I am dying.

They say the owner collapsed to the floor in fear, without saying a word, because the dog had spoken to him. He trembled in fear and could not stand up. The dog got up and said to its master, "Now you will take my place and you will realize everything that happens during the night." With one of its paws, the canine grabbed its owner and rubbed his eyes and told him that he would be a dog-man. At that moment the dog died.

When the man plucked up his courage, little by little he got up and went to tell his family all that had happened to him. But everything looked strange. His wife, they say, looked like a shadow [ghost]. His bed looked like a basket where dogs sleep.

At bedtime, they say, the man could no longer sleep as we people do. He went to bed as the dogs go to bed, and he no longer wanted to sleep with his wife. Every so often he would get up from bed and go outdoors. When the neighbor's dogs barked, the dog-man ran outside too. Sometimes he would stay in the porch as dogs do.

One night, when the neighbor's dogs began to bark, they say the dog-man also went running outside to see what was happening. Because his eyebrows and eyelashes now looked like those of a dog, they say that now he could see what dogs saw at night.

Well, they say that the dog-man crossed through a peach orchard and suddenly an old couple appeared, a man and a woman. Both were talking, saying, "The sitio is very dirty and has a lot of trash." So they began to sweep the sitio until midnight. It was the spirit of those who were owners of the sitio. The dog-man was seeing all these things; that is, the things that dogs see when they bark in the night.

When the old couple finished sweeping the sitio, they spoke to one another, saying, "The day after tomorrow we will come back to sweep our sitio again. Now we will go to another sitio. It must be very dirty. We are going to sweep it."

They went out into the street and disappeared. The dogs began to bark more and more. The dog-man, they say, wanted to bark, too, but could not do as the dogs do. Crying, he went inside to wake up his family and tell them what dogs see during the night.

This gentleman reasoned like a man but saw like an animal at night, because he told his family what he saw when dogs barked. But the man no longer was normal. Little by little he lost weight because he could no longer eat as we eat, nor could he sleep at night.

This happened because of hitting the dog that was guarding the house until it died. So, when dogs bark a lot, they are seeing something strange. One must be careful. You must not go outdoors or hit dogs, so the same thing does not happen to you that happened to the dog-man.

1. In this and other stories, Maya Indian storytellers typically sprinkle the text with self-exonerating expressions such as "so they say" and "it is said," which help the storyteller avoid having his own veracity questioned (Shaw 1971:10-11). As Allan F. Burns (1983:27) points out for folktales of the Yucatec Maya, these constructions also alert the listener or reader that the narratives imparted are part of the oral tradition rather personal anecdotes.

For different versions of a Yucatec Mayan story in which a female dog sings to her mistress's baby as it takes care of it, see Margaret Park Redfield (1937:24) and Mary H Preuss (2005:17). In Redfield's version, the dog is a foul-mouthed female who resents her mistress's neglect, but In Preuss's version the dog is an obedient male who causes the woman to drop her jug of water and form an enchanted lake.

Story by Santiago Cuc, a Kaqchikel of Sololá, seventy-nine years of age. He is the farther-in-law of Pedro Cholotío Temó's daughter who is a teacher. Don Santiago told the story to Pedro, who wrote it down in Spanish and mailed it to me (Sexton) in the year 2000.

[As I say in the introduction, we used the U.S. convention of using quotation marks, which a number of Spanish publications have adopted.]

Order The Dog Who Spoke and More Mayan Folktales  from Amazon.com or University of Oklahoma Press or  Barnes and Noble