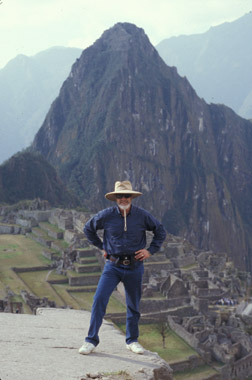 After earning a bachelor's degree in anthropology from UCLA, I began studying for a master's degree.  The U.S. Army, however, interrupted my graduate studies with a call to active duty, which included a tour of duty in Vietnam and a leave to Thailand.  After a military leave of absence, I returned to UCLA where I completed a master's degree in 1971 and a Ph.D. in 1973.  The same year I began teaching at Northern Arizona University in Flagstaff, where I received the NAU President's Award for excellence in teaching, research, and service in 1981.  I was named Regents' Professor in 1991, and I was selected as the NAU Phi Kappa Phi Faculty Scholar in 1997.  After teaching at NAU for 41 years, I retired in 2014 as Regents' Professor Emeritus.

Travels to Alaska and Canada in 2009, to Germany and France in 2010, and to Spain, France, Italy, and Greece in 2013 enhanced the introduction to my undergraduate course on anthropological perspectives of folklore of the world.  Travels to Ireland in 2003 and 2010; to Vietnam, Cambodia, and Thailand in 2004 and in 2008; to Australia in 2005; and to Guatemala in 2011 enhanced the Celtic, Southeast Asian, Aboriginal Australian, and Mayan blocks of the course.  These travels also enhanced my graduate seminar on world folklore. Travels to Puerto Rico, Barbados, Mexico, Guatemala, El Salvador,  Belize, Honduras, Nicaragua, Costa Rica, Panamá, Colombia, Venezuela, Ecuador, Péru, and Bolivia enriched my courses on Latin America.  Nineteen field trips to Guatemala resulted in a number of articles and books with "Depiction of Animals in the Popol Vuh and Current Mayan Folktales" (2010) and The Dog Who Spoke and More Mayan Folktales / El perro que habló y más cuentos mayas (2010) the most recent.

I am a past president of the Southwestern Anthropological Association. Also, I was a member of the board of editors for the Delaware Review of Latin American Studies, an inactive internet journal whose contents are available online.  In addition to Latin America and Southeast Asia, I specialize in qualitative and quantitative research methods, psychological anthropology, life histories, folklore, development, modernization, and cultural change.

Since 1970 I have been working with Ignacio Bizarro Ujpán (a pen name) who is a principal, or town elder, of San José la Laguna (a pseudonym), Lake Atitlán.  He has been my main collaborator on six books--four volumes of his life history and two volumes of folktales.  He has served in a number of civil and religious offices in his town, including síndico (syndic), the second-highest elected office, and alcalde (head) of the cofradía of San Juan Bautista, the most important religious brotherhood.

Ignacio writes in his spare time, when he is away from his cornfields and coffee groves and when he is not helping his wife, a Tz'utujil  Maya Indian, with her weaving projects.  They have eight children and sixteen grandchildren.  Four of their children  have earned teaching credentials.

I am married to Marilyn Rex, a retired social worker.  We have one son, Randall, a patent attorney and software engineer, who has a son and a daughter.  My favorite extracurricular activities are alpine skiing, weightlifting, mountain biking, walking and jogging with our schnauzers, and growing roses.

On 20 October, I was inducted to the Fifth Annual South High (Bakersfield, California) Hall of Fame Class of 2018. To view a five-minute video that Virgil Miller produced for this event, you may click the following link: YouTube.