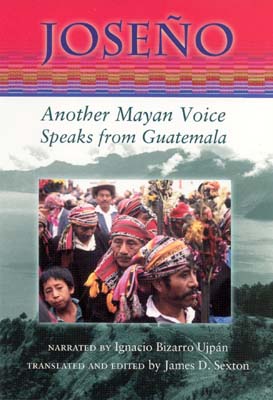 James Sexton met Ignacio Bizarro Ujpán in 1970, when Sexton traveled to Guatemala for the first time as a graduate student in anthropology.  Ignacio became Sexton's research assistant and, as the men's friendship grew over the years of fieldwork that followed, Sexton asked Ignacio to keep a detailed journal.  In his diaries, Bizarro chronicles more than a quarter century of the turbulent history of Guatemala, returning again and again to the themes of community solidarity, civil violence, alcohol abuse, resistance to repression, political turmoil, and the reinforcement of  traditional and religious values that color daily life in the Maya communities of Guatemala's highlands.

Joseño: Another Mayan Voice Speaks from Guatemala covers the period from 1987-1998 and is the fourth and latest volume of Ignacio's diary, the authentic life history of a common man, a campesino, a principal (elder) in his town, and a Tzutuhil Indian whose life has spanned the ongoing struggle for democracy and economic justice in Guatemala.  His vivid and plain-spoken account of life among the Maya during the war between guerrillas and the army in the 1980s and 1990s offers detailed descriptions of the atrocities committed by both sides and brings the reader into a Mayan world richly textured with indigenous beliefs and practices.  Ignacio's diary, too, records the Mayan cultural revitalization sweeping Guatemala, as well as the fortunes of the Indian peoples who have so often been pawns in the vicious power struggles between the Left and the Right.

About the Authors / vi

1.  Guatemala with political boundaries and location of Lake Atitlán / 3

1.  View of the eastern side of Lake Atitlán, near the village of Godínez / 7

2.  Women of Santiago Atitlán marching in a religious parade / 22

3.  Women soldiers marching as a show of strength in a military parade / 23

5.  A woman vendor and her daughter in Panajachel / 35

7.  A white roll of guindana with tied and dyed thread on a table / 77

9.  Temple I of the North Acropolis at Tikal in the Deparmtent of Petén, Guatemala / 99

11.  A campesino working in his terraced onion fields on the shore of Lake Atitlán / 109

12.  Men of Santiago Atitlán wearing their red sutes during a procession / 117

13.  Fishing for black bass on the northern side of Lake Atitlán / 159

15.  Tourists in Santiago Atitlán listening to a talk about 1990 massacre near crosses that mark individualized monuments to those who were killed / 165

18.  Ignacio offering incense to the image of San Juan Bautista / 239

19.  Parading the image of San Juan Bautista through the main streets of the town / 251

20.  A large flag and an eternal flame in the plaza in front of the National Palace in Guatemala City serve as a monument to the signing of the peace accord in December, 1996 / 255

Excerpted from Joseño: Another Mayan Voice Speaks from Guatemala, narrated by Ignacio Bizarro Ujpán and translated and edited by James D. Sexton. Copyright © 2001. All rights reserved.

The Violence in Santiago Atitlán

This is what is taking place in our pueblo of Santiago Atitlán, land of the ancient King Tepepul.  There is much more violence this year of 1990 than there was in previous years.  Day after day there are more massacres of the naturales [Indians] of our beautiful Tzutuhil town.  It seems, however, that the two sides are claiming victims and many more than in October of this year.  Almost on a daily basis, the Tzutuhiles are killed by bullets.

Truthfully, I did not witness this.  I learned of it through the news on the radio and from the talk of the people living around the lake, both of which condemned the massacre of six tradesmen who were returning from Cerro de Oro with a truckload of avocados.  At the said location, they were all shot, and their bodies were strewn over the road.  It is said that one of the assassins, seeing that one of the victims still lived, pulled out a sharp machete and split open his chest and neck.  It was said that these killers were thieves, although no concrete evidence supported this.  What was known for sure was that six victims were naturales and residents of Santiago Atitlán, Sololá.  The truck driver was a Ladino.  He was able to save his life, although he received many blows.  He said he was told to drive the truck to the town, and he did as he was told.  It was clear that in our Tzutuhil town of Santiago Atitlán there was no longer any respect for human rights.

The [following] event took place on Sunday, 21 October 1990.  In the night, it is said, all the zajorines were gathered together in the cofradía of Santa Cruz, the same place where they worship Maximón.  The zajorines had gathered together to perform a costumbre to Maximón in order to pray for a miracle to eliminate the violence and killing.  Everything was prepared, when suddenly, minutes before the ceremony was to begin, a man with his face covered entered the cofradía.  This man then asked all those present, with the exception of the alcalde of the cofradía, Don Martín Quejú, to leave, as he had some business to discuss with the alcalde.  The zajorines complied and went outside.  The alcalde, Martín Quejú, and the primer zajorín [first shaman] remained inside.  After a few minutes, shots from an automatic weapon rang out.  It is said that the man with the covered face, after having murdered Señor Quejú, calmly walked out onto the street and left.

When the rest of the zajorines reentered the cofradía, they saw the body of the alcalde bathed in blood.  He had been killed with fifteen bullet wounds.  Also, Maximón had been wounded by gunfire and was half destroyed.

On 20 May we bought paint the color of sky blue.  The mayordomos painted the house [one room, inside and out], but three days earlier we had washed the walls and the loft with water.  On this day my wife and I provided lunch for the cofrades.  I told them that on 13 June we would begin to collect the decorations but that it would be in the afternoon because we also needed to work in our fields.

Thus it was.  The truth is that we liked preserving a little of our heritage.  The juez bought the bombas and the manteles [tablecloths], and I obtained the flowers to decorate the area where the image of the saint would be placed.  The nineteenth of June I went to Santa Ana to buy the pox lak' flowers.

What kind of flowers are these?

They are small yellow flowers that grow on a plant that has small leaves.  They can last sixty to ninety days without water.  Since Ladinos don't use them, I don't know their name in Spanish.

They are flowers that our ancestors used in the past.  In Santa Bárbara, we asked for them at many houses until we finally found them.  But because there wasn't enough of them, we had to pay a mozo to look for more flowers in the mountains.

On Sunday, 20 June, we began to tie special white sticks (used by our fathers) in grids under the part of the ceiling that covers the altar of the holy image.  We planned to attach aromatic leaves and flowers to the grid.  We finished at nine o'clock at night on 22 June.

Then I went to the mountains to look for some aromatic leaves that in the Tzutuhil language are called c'o jotz, but I don't know what they are called in Spanish, since only we natives use them.  By the grace of God, everything went well.

I was on the mountain alone when a woodpecker arrived to sing.  We Maya worry when a woodpecker sings on the left side of a person, which is considered a bad omen, but when it sings on the right side of a person, it is considered a good omen, or sign of good luck.  Thus it was when a woodpecker blurted out a song above in a tree that was directly in front of me, not to the left or to the right.  The truth is that it troubled me and I said, "Woodpecker, guardian and alguacil of the world, are you giving me good or bad advice?  May the god of heaven and earth bless you and me."

The bird sang only one song.  After picking the leaves, I walked slowly down the mountain because it was steep.  At three o'clock in the afternoon I arrived home.

Order Joseño from:  Barnes and Noble or University of New Mexico Press or AddALL  or  Amazon.com