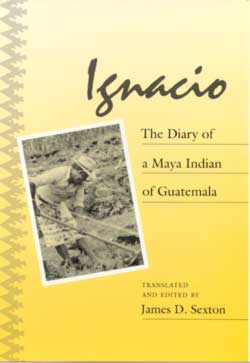 Ignacio: The Diary of a Maya Indian of Guatemala

"At midnight on Tuesday, some desconocidos [unknown men] arrived in a [yellow] pickup.  They went to the house of Mario Puzul, jefe of the group [of commissioners].   They broke into his house and took him by force of arms to the car.  His wife says that he recognized the jefe of the group and said, 'Buenas noches, my lieutenant,' but the lieutenant didn't answer.  Mario said good-bye to his wife and his brother, Francisco.  The car left and the uproar began, ringing the bells and the people gathering.  But there was nothing they could do."

This is the story of Ignacio Bizarro Ujpán, a Maya Indian who resides on the shores of the beautiful Lake Atitlán, Guatemala.  The story narrates Ignacio's life town, and country during the 1980s, a period when many campesinos found themselves caught between two fires--the insurgency of the guerrillas and the counterinsurgency of the army.   Meanwhile, Ignacio and his fellow townspeople attempted to maintain as much normalcy in their lives as possible.  They cultivated their bean and corn fields, educated their children, and practiced either folk Catholicism (a blend of Catholic and Mayan beliefs and practices) or evangelical Protestantism.

Excerpted from Ignacio: The Diary of a Mayan Indian of Guatemala, translated and edited by James D. Sexton. Copyright © 1992. All rights reserved.

Accused in the Military Detachment of the Navy: A Repression

I was accused in the military detachment of the navy; I don't know exactly when. What I know is that during the night of 7 March they called me to the office of the military commissioner, telling me that I had to present myself to the military detachment in San Luis for an urgent matter. When I returned from the office, I had to look for the jefe [chief, head, boss] of the commissioners to accompany me. But then later, I decided to go without him. Instead, I asked a friend, Miguel, "Come with me, amigo. I might die. You need to witness what might happen and advise my family."

But always I was with doubt because I didn't know why they had called me. I felt somewhat nervous and a little afraid.

Tuesday, the eighth, dawned, and I went to San Martín to catch the launch, but beforehand my family was worried because the situation was delicate. When I arrived in San Luis, we went to eat breakfast. I drank a beer, and I went to the detachment, which is about four kilometers from the town. When I arrived, I had to wait until they were ready to receive me. In doing this, I met ten Martineros [people of San Martín]. I didn't know what they were doing, but there had been a lot of kidnapping and violence in their town. We had to wait for the Martineros to leave.

Then they received me in the office of the army. "Come in, what do you want?" the captain said.

"My captain, I have received your order to present myself here."

"Look, I don't have an order. I just came to present myself because you have called me to come."

"Have you served in the military?"

"Sí." And then I showed him my name on my certification of service.

"What problems do you have with the jefe of the military commissioners?"

"Ah, very well," he told me. "Are you part of the civil defense patrol of San José?"

"Ah, fine, and you have taken your turns?"

"How can you prove that?" he asked me.

Well, I had brought a notebook with the dates that showed I had taken turns and the notes taken of the incidents in which we had encountered persons, cars, and all of this, and I showed this to the officers. "Look, I have taken turns; these are my notes."

"The jefe of the military commissioners came to tell me that you are a capricious person, that you don't want to guard your pueblo."

"On the contrary," I told him, "I'm a person who likes to guard his town because we are honorable workers," I told him. "The commissioner became angry at me because he asked for a quetzal from each of us--we are more than 400 persons, which would be Q400. And this is an arrears for us poor people. Just because I was the one who said that it was better not to give him a quetzal, he accused me here," I told the captain.

"I know that I have collaborated. I have my dates."

For sure I didn't know that the jefe of the military commissioners had accused me of anything until the captain told me. But the reason is that he once asked me for money. I told him that I didn't have any money to give away and that if he wanted money he needed to work because only the blind should be given money since they were unable to work. This was what made the military commissioner angry. He accused me of disobedience and nonfulfillment of service of the civil patrol.

Why did he want money?

He wanted a lot of money from all the civil defense patrol. Earlier, he said it wasn't much, just 25 centavos from each member of the patrol to buy some patches to put on the arm that say PAC [Patrullo de autodefensa civil]. This was money for a typical, simple strip of cloth that cost 25 centavos. Then, as we are many, he collected a lot of money [for the patches].

Then this commissioner met another woman, who had a mantel [cloth] that was blue, a little finer than the yellow ones that we were already wearing on our arms. And he commissioned more cloth, finer yet, from her, and it cost a quetzal.

Why do you think he wanted to buy new cloth from her?

He wanted to give her this business so that he would become her lover.

Order Ignacio from Barnes & Noble or AddALL or Amazon.com