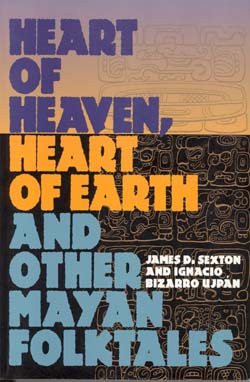 Heart of Heaven, Heart of Earth

The Tzutuhil Maya who live on the shores of Lake Atitlán in Guatemala tell stories as lush and fantastic as their highland surroundings.  Humans can assume animal forms; the lord of Pulchich protects forest creatures; magical power infuses ordinary objects; and while nima sotz' (the big bat) controls a hellish afterworld, the singing goddess of the lake presides over an underwater garden reserved for those who drown.   For the Tzutuhiles, the stories reinforce the importance of traditional rituals as well as the values of honesty, humility, charity, generosity, uprightness, cleverness, and hard work.

Focused on human relationships with the supernatural, Heart of Heaven, Heart of Earth provides insight into the beliefs, values, and behavior of the Tzutuhil Maya.   The stories show that despite centuries of Hispanic influence, they have retained in both their legends and their contemporary stories a vital link to their ancient worldviews.

Excerpted from  Heart of Heaven, Heart of Earth and Other Mayan Folktales by James D. Sexton and Ignacio Bizarro Ujpán.  Copyright © 1999.  All rights reserved.

Heart of Heaven, Heart of Earth, A Tzutuhil Tale [which is the first folktale in the book]

A Tzutuhil tale goes like this. Our fathers, the old Tzutuhiles, were peaceful men. They didn't like war because they possessed great wisdom about how to do things [without resorting to war]. They were dedicated only to making sacrifices in the hills and the volcanoes, invoking the Heart of Heaven and the Heart of Earth, called in Tzutuhil Ruc'ux Caj, Ruc'ux Uleep.

When the Spaniards began the conquest, killing many Quichés, Mames, and Cakchiqueles, the Tzutuhiles formed a single group and met in order to think and speak. They met in a place that was called Chuitinamit, now called Santiago Atitlán, on the shore of Chinimaya, now called Lake Atitlán. They could have opened a front for a bloody war against the Spaniards because there were many of them who had the power to disappear in the air, in the clouds, and to go below the lake.

Then the story goes that those who had this power said:

Indeed we can make a stand against the Spaniards for a bloody war because there are many of us Tzutuhiles who possess the power to disappear in the air, in the clouds, and below the lake. We know that we have the power to walk in the air and in the clouds and nothing will happen to us, but it's a shame that we will lose many of our people--our women, our children, and our grandchildren. We cannot allow our race to be terminated and to stain the greenery of the ground with our blood. Let us use our intelligence and wisdom.

Then the story says that an ajkum [shaman] and Tzutuhil prince called Ajpop Achi spoke to all those who were gathered:

I am an ajkum and Tzutuhil prince. My voice has been heard by Ruc'ux Caj, Ruc'ux Uleep (Heart of Heaven and Heart of Earth), and they tell me, "It is better that we disappear in the air, in the clouds, below the lake, in the hills, and in the volcanoes. When the itz'el tak' winak ("demons," the Spaniards) arrive on our land, each is to use his power. Those who don't have this great ability will remain, but there will not be a war."

The story says that everyone agreed. When the Spaniards invaded the Tzutuhil lands, many of our Tzutuhil forebearers didn't want to spill their blood; they left of their own power. Many of them disappeared with their own families. Now they say they are in the clouds, they are in the hills, in the volcanoes, and they live under the lake. Before leaving they said to those who didn't have this power:

So it was when the Spaniards arrived in these lands. The Tzutuhiles of great powers--that is, the ajkumes, the naguales [persons who can turn into spirit forms], the brujos [witches], the thinkers, the clairvoyants--had already disappeared voluntarily. Now they say that they are living below the lake. They are in the air, in the clouds; they live in the volcanoes and the hills. Moreover, for that reason, among us Tzutuhiles, the custom is believed and preserved that when a person goes on a trip or to work, be it in the early morning, during the day, or in the night, upon leaving one's house, he with his hand offers a kiss in the air, remembering and saying, "Nataa, nutee, watit, numamaa (fathers, mothers, grandmothers, and grandfathers) of us, the Tzutuhiles, accompany me in the sorrows, in the sufferings, and in the happiness of this day or night." The person offers a kiss with the hand to the air because he believes that our forefathers are present. And if the person departs over the lake, upon getting into a canoe, he grabs water with his hand and kisses it, saying the same words, "Nataa, nutee, watit, numamaa who are under the lake, accompany me." A person also does this when he is going to the hills and to the volcanoes.

The story says that when the people leave their houses, if they do not do these remembrances--if they don't entrust themselves to the Heart of Heaven [and] the Heart of Earth and to their forefathers--that is when the bad hour strikes them. They drown, fall in the ravines, and die in accidents or of sudden death.

Order Heart of Heaven, Heart of Earth from Amazon.com or Barnes & Noble