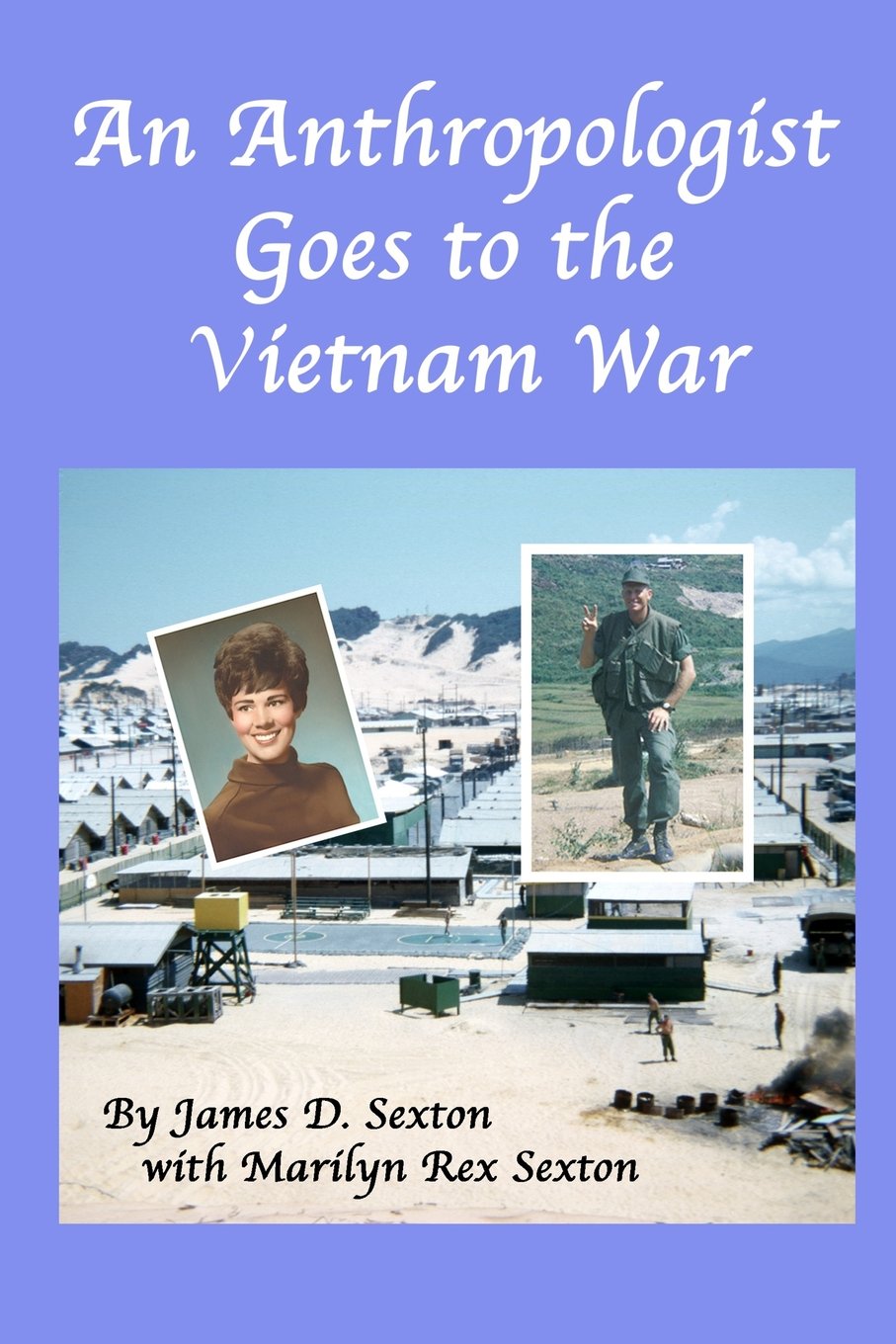 An Anthropologist Goes to the

On 10 May 1968, President Lyndon Johnson activated James Sexton from the U.S. Army Individual Ready Reserve. The machine-signed orders gave him 30 days to withdraw from his second year of graduate school in anthropology at UCLA and report to Ft. Lewis Washington. Letters and tapes by James and his wife, Marilyn Rex, serve as the basis for their story from 1968 to 1969, focusing on Ft. Lewis, Ft. Belvoir, Cam Ranh Bay, Nha Trang, and the surrounding hamlets and villages during the peak of the U.S. military involvement in Vietnam.

Five out of six of the some 2.5 million military personnel who served in Vietnam were support troops rather than grunts in the field. Because most books on Vietnam are from the perspective of U.S. infantrymen, this book is unique because Part I is from the point of view of a company clerk of Company B, Troop Command, U.S. Army Depot. As a college trained enlisted man, Sexton offers rich insights into the people and culture of Vietnam, as well as many of the U.S. servicemen, who were sent there to help save them from communism.

Parts II and III are from the viewpoint of Marilyn and James' trips to Vietnam in 2004 and 2008, traveling with and interviewing Vietnamese guides in Hanoi, Ha Long Bay, Bat Trang, Tam Coc, Hue, Da Nang, Nha Trang, Cam Ranh Bay, Ho Chi Ming City (Saigon), Cu Chi, the Mekong Delta, and Tay Ninh. Maps, photographs (black and white in print  edition; color in digital edition), notes, and an appendix enrich the entire story, and an epilogue updates significant events in Vietnam to 2015. Finally, an index (in print edition) enhances searching for key subjects within the text.

Excerpted from An Anthropologist Goes to the Vietnam War. Copyright 2016. All rights reserved.

Since it has made the news on our radios in Vietnam, it will probably make the news back in the states. So to keep you from worrying, I will tell you what happened. Yes, we were hit last night with rockets and satchel charges. About 1 a.m. we went on a real alert. Some fifteen rockets landed around the air force hospital [12th USAF Hospital] at Cam Ranh.

Altogether 99 were injured and one killed [by sappers throwing satchel charges and shooting small arms fire at the 6th Convalescent Center, an army hospital farther north]. The news said nothing about the GI from our area that was shot to death by his own bunkmate. Apparently the guy who was shot had left the bunker early in the morning, probably to take a piss, and woke up the fellow who was sharing the bunker with him. Being startled and scared, the other GI riddled his partner with his M-14. We went off alert at 2:30 a.m. ...

A few days later, we processed in some new replacements who were in flight during the attack on Cam Ranh Bay. They were supposed to land, but before they could, we were hit with rockets, and air traffic controllers put the pilot on a holding pattern, circling around the base. The plane could not land because of the activity below. The rockets fired by the enemy and the satchel charges thrown by the sappers exploded, lighting up the night. The poor recruits could see from their airline windows flashes below as they circled and waited for it to be safe to land.

"Well," I asked one of them, as I processed in those assigned to our company, "What did you think was going on when you were trying to land?"

"Man, I was scared shitless. We couldn't land. We had to circle the airport. It looked like the Fourth of July, but it was for real. I wondered 'What the fuck am I gettin' into?'"

"Yeah, I know what you mean," I replied, "I was scared shitless when we were landing early in the morning, and Cam Ranh Bay wasn't even getting hit. I didn't relax until the sun came up, and I could see where to run for the bunkers. You'll adjust though. This is the first time we've been hit since I've been here. It's not as bad as it seemed last night."

Those of us in the office bonded with these new replacements. You simply could not know this kind of fear unless you experienced it. In anthropological terms, it was equivalent to a traumatic rite of passage into manhood.

The sapper attack on Cam Ranh Bay well illustrated what Stanley Karnow (1983:26) meant when he wrote in Vietnam: A History that the danger in Vietnam was pervasive and chronic. A GI working in an office in Saigon or a warehouse in Da Nang could be injured or killed at any moment of the day or night by communist mortars or rockets, or for that matter, by booby traps. There were no really secure areas in Vietnam (Karnow 2001).

Order An Anthropologist Goes to the Vietnam War  from Amazon.com

Home     Publications     About the authors